View source
watch 01:36
We're Getting Mutants in the MCU - The Loop
Do you like this video?
Play Sound

There are a wide variety of items in Descenders. They are all strictly cosmetic and do not offer any performance or bike bonuses. All items are obtained in various manners. All work with each of the three bike types.

Items are colour-coded by their rarity and unlock method; to determine what rarity an item is, check the background.

If any items are marked with these symbols, they are not available on that particular version of the game:

In the case of the console versions, it is highly inadvisable to attempt to redeem item codes for items if they are not yet implemented in those versions.

To find a specific item easier, use your browser's search function (typically CTRL+F) and enter the name of the item (or part of it, in some cases).

The following is a list of items in the game, separated by rarity and unlock method.

A 'run' is defined as a Career or a Career-Plus session. The Daily Challenge (which is effectively a fixed seed for Career) also allows you the ability to unlock items. A Multiplayer Career session, while allowing for the ability to unlock items, changes up the scoring mechanics slightly by averaging the amount of reputation earned by all players in the lobby, before determining item drops.

No other sessions allow you to unlock items.

It's worth noting that although your chances increase the more rep you score in a run, unless you are directly hitting the 100% threshold an item of the targeted rarity is not guaranteed. It is entirely possible to score, for example, 200,000 rep in a run thrice in a row and yet not get any Extraordinary out of it due to bad luck.

These items are unlocked by inputting a code under Extras --> Redeem Code. Codes are case-insensitive. Asterisks (*) denote additional notes related to the items below the table.

The MERRYCHRISTMAS code currently has known redemption issues; a game restart will fix the game.

Players might need to subscribe to their respective console's online subscription service in order to be able to redeem codes.

For the following group of items, one single code NATIONS gives all of these items. (The country names are not individual codes.)

For the following group of items, one single code PRIDE gives all of these items. (The item names are not individual codes.)

The Rainbow Flag was originally classified as a normal item drop; it can still be obtained as a random drop in a normal Career session.

The following items were designed by winners of the Descenders Mod of the Year 2019 competition. Note that Z50 Productions and Siro do not (currently?) have Mod of the Year gear.

^Stoker Bike Park now comes with the game itself; downloading the mod is no longer necessary.

To unlock multiple blank sets of Custom Gear (10 each of Goggles, Helmet, Jersey Long, Jersey Short, Pants, Shorts, and 25 Bikes), redeem the code CUSTOM. For full instructions on how to use your own custom gear, see the readme file in the CustomGear folder in the installation directory.

It's worth noting that this is marked as not being available on Xbox, PS4, and Switch for obvious reasons (the gear cannot be modded), but it is still possible to redeem the codes on Xbox and PS4 only for extra blank gear.

The High Voltage Set (except the bike) and the Training Set can also be unlocked via the codes, in quotes, "HIGHVOLTAGE" and "STABLE". To view the item images, press CTRL+F in your browser and type the respective code, then search for a latter search result to jump to that section of the page. As these items are not classified as Limited, they are not displayed here.

These items are unlocked by fulfilling special conditions in-game.

*You get the Mod.io pants and jersey simultaneously.

Complete a full Career mode run for the full set.

Complete a full Career-Plus mode run for the full set.

These items are unlocked during special events. Items unlocked via developer-supplied codes are marked with an asterisk (*).

These items were awarded via developer-supplied codes to the top three positions of the Mod Of The Year 2020 competition, as well as various community-run tournaments.

These items are limited in the sense that they are only available from contests or other occasions. These are among the rarest limited items to ever exist in the game, and there is no guarantee that you'll be able to get them, with some items (accordingly) unattainable. Keep an eye on the Discord server for any news.

These items are PC-only and were obtained if you had more than the specified amount of Rep at any point before May 15, 2018 (even if you lost Rep and dropped below the values required). For obvious reasons, these are no longer attainable.

This kit is exclusive to Xbox One and Microsoft Store owners.

This kit is no longer available due to Mixer's shutdown. The unlock method is preserved below; however it will not work.
This kit was unlocked by setting up Mixer integration: Settings --> Gameplay --> Go Interactive on Mixer.

These jersies are unlocked by purchasing the associated real-life shirt from IndieBox.

Having existed in the game files since the start, these items were finally made unlockable through a new challenge-based system called The Grand Tour, on October 28, 2021.

Completing all challenges in all 8 Tours will award this bike. This was added on December 14, 2021.

This may not be available on Switch yet; this is however pending confirmation.

Completing all challenges in this tour will award this bike and jersey.

The Baebale Jersey was previously awarded to winners of the Discord Server's community Haybale Challenge (circa May 2020).

Each of the three teams, Kinetic, Enemy, and Arboreal, have their own sets of skins. To join a team, find and complete their team node thrice, then accept the offer from that team to join them. When that happens, you will immediately get the community equipment set. To progress further and unlock more team gear, continue to complete up to 3 sponsor objectives that the game issues every day at 00:00 GMT. The order the rank items are unlocked in is top-downwards, meaning you will unlock the Novice Goggles before the Novice Helmet, and so on.

Sponsor objectives gradually get harder as the player ranks up. Should any sponsor objectives be left uncompleted on any day, they will carry over to the next day(s) until they are completed; however, no new objective will be issued in that case immediately after completion. One sponsor objective can be changed per day. The system will not skip unlocks for items that you have already unlocked, which means that it will take 16 days at minimum to fully complete a sponsor contract for a single team (48 tasks in total).

A team can be left at any time; however, when this occurs, progress made towards sponsor gear will be reset, team gear will not be able to be equipped, and any team gear equipped will be automatically unequipped. However, the player will keep any team gear that they have already unlocked.

Note that Pants/Shorts, and Jersey Long/Short are unlocked simultaneously. For reference, the legacy system for team unlocks is preserved at the directly preceding link.

These kits were designed by members of the Descenders Discord Server prior to game launch.

These items are unlocked during special events. Items unlocked via developer-supplied codes are marked with an asterisk (*).

Note: It is highly likely that similar tokens exist for Arboreal and Enemy, but these are not officially confirmed.

'Normal' skins are skins earned by reaching rep targets during runs and then getting lucky with the dice rolls. There are 4 skin rarities: Common, Uncommon, Rare, and Extraordinary.

How the item drop system works is as follows: the game first checks your rep earned in a session to see what is the highest rarity item you are eligible for. From there, the game, depending on the rep earned, will roll for a chance at that item. If that roll fails, the game will then proceed to the immediate lower rarity and do the same procedure. This continues until either an item is gained, or there is no more item in the lowest rarity left to unlock. For example, if the player earns 50k rep in a run, the game will roll for an Extraordinary item, with a 20% chance of succeeding; failing which, the game will roll for a Rare item, with a 100% chance of succeeding.

The player can only earn one item from this item category per run.

The player starts out with the Flat Basic and Ether Basic skins by default.

These items were designed by members of the Descenders Discord Server prior to the game launching out of Early Access.

The rest of the equipment sets that these goggles are a part of can be seen here.

It is possible to get most of the High Voltage equipment by entering the code, without quotes, "HIGHVOLTAGE". You get everything except the bike.

Among the items listed in this category are #SCRAPE-branded goggles and clothing. #SCRAPE Gear is a brand owned by mountain biker Fabio Schäfer, and is the first real-life brand added to the game.

There are also HAOW Jerseys listed in this segment, and is the second real-life brand added to the game.

These items were designed by members of the Descenders Discord Server prior to the game launching out of Early Access.

The goggles corresponding to these equipment sets can be seen here.

It is possible to get most of the High Voltage equipment by entering the code, without quotes, "HIGHVOLTAGE". You get everything except the bike.

Interestingly, the Flamingo Bike, while not being a 'community item', is classified in this category.

These equipment sets and bikes glow in the dark.

Note: the InvisiBike is see-through.

The Training Set can also be unlocked by inputting the code, without quotes, "STABLE".

These items are known to exist in the assets, but are currently unattainable for various reasons.

These items were most likely a test for rear wheel-mounted accessories.

Note: "Rep Total" refers to the total amount of Reputation earned in a single Career/Career-Plus run - NOT the total lifetime career Reputation. 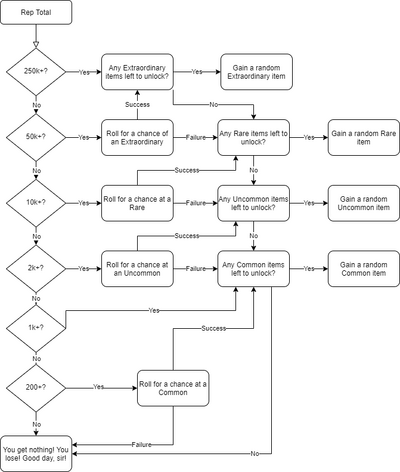