How to play guide for Descenders

This page serves as a basic how to play guide for Descenders.

When you select Ride from the main menu, you are presented with 6 options: Career Session, Career-Plus Session, Freeride, Daily Challenge, Multiplayer Lobby, and Bike Parks.

For the Steam version only, before selecting Ride, there is an additional menu option entitled "Mods".

Career Session will allow you to pick your choice of starting location: Highlands, Forest, Canyon, or Peaks. The shortcuts to the last 3 zones have to be unlocked first.

Regardless of starting location, the player will always start with a Basic Setup level (a 4-4-4 Steepness-Curves-Stunts rating, except for the Volcano, where Stunts is replaced by Tectonics). The goal of each level is to bike to the finish line. After completing the level, the player will be presented with a world map of the current region, from which they can choose the next track/node that they would like to complete. All tracks are procedurally-generated by the game. Every node will remain accessible on the map; the player is not locked out of completing them, but they still have to complete an adjacent node to be able to play their target node. To complete a region, the player should navigate through the nodes to the Boss Jump node, and then complete that node. In order to perform a "speed run", ignore all other nodes, and only complete the ones that lead to the Boss Jump.

While the game generates the track, it also assesses the generated track and randomly picks a bonus objective that can be achieved on that track. Completing the bonus objective will yield 1 life.

There are always special nodes in each region: a Danger Zone, where the player can earn more rep but lose double the health from bails; a Medic Camp, where the player earns 1 life from completing the node itself and 1 more for completing the bonus objective; a Helmet Cam, where the player is locked into first-person view and cannot switch out of it until the track is done (but earn more rep for their troubles); a Team Node, where the player can pick a team for a node appropriate to the team picked; and a Fire Node, which offers a lot of challenge (an 8-8-8 level rating), and changes the Boss Jump node to a fire ring variant upon completion. Each region also has a special handcrafted node called a Bonus World.

In any region, the first 7 nodes will be in daylight conditions (unless modifiers change the weather). Following that, 2 nodes will be in dusk conditions, and the rest will be in nighttime conditions, with the bike's headlight continuing to lose battery power for 2 nodes until it dies on the third node since nightfall. Should nighttime fall, daylight will only return once the player moves to the next region. Some regions are easier despite nightfall, for example, the Desert is a very open place with few obstacles, so the moonlight is actually helping the player rather than being a hindrance. The Highlands and Forest, on the other hand, naturally have trees that block the player's view, which makes them much harder. It is because of this deteriorating light conditions that you should unlock the Boss Jump as soon as possible, and ignore all other nodes unless you are specifically attempting to earn more rep, more lives, or some other reward.

The player should try to do as many tricks as possible in order to earn Rep. There are diminishing returns for repeating the same tricks over and over. The amount of Rep earned during a run will determine the type of item that a player may receive following the conclusion of a run (whether it be by getting "rekt", retiring from a session, or completing the Peaks/Volcano boss jump); see here for a full list of items in this category.

As of full release, it is possible to see other players currently riding the same node that you are riding, due to the nature of how runs are generated (every few minutes the run seed globally changes).

Career-Plus functions similarly to Career in most aspects, but differs in a few:

Like Career, shortcuts to the last 3 regions have to be unlocked first. Unlike Career, there are no bonus worlds.

Freeride will allow the player to generate a level by specifying various parameters. From there, the game will generate a Seed, and then build a level on that seed. Freeride can also be used to replay existing seeds that the player may have previously saved.

The player can enter any seed from any region; however, to generate levels in-game from a specific region, the player will need to unlock the shortcut to that region first. The Volcano is the only exception; its seeds cannot be entered and levels cannot be generated in-game until the player has cleared the Volcano boss jump.

For Bonus Worlds, they can be selected via the menu option if their objective was completed during a Career mode run; otherwise, the only way to play them is by inputting their seed.

The player can add as many Crew Members as they want to the in-game generator; however, they can only add crew members that they have previously selected in Career, and only crew members with a yellow icon will be reflected in the seed.

Daily Challenge works the same way as Career Session, except that this may only be attempted once, with every player in the world getting the same session. A new session begins at 00:00 GMT daily.

Added upon launch, Multiplayer allows the player to see other players in-game, host lobbies, and join other players' lobbies.

Mods are a series of handcrafted modded maps, designed by the mapmaking community.

These are the bindings for Descenders. Only keyboard bindings are re-bindable. All bindings can be viewed in-game in the options menu, and are reproduced here to serve as an external resource. 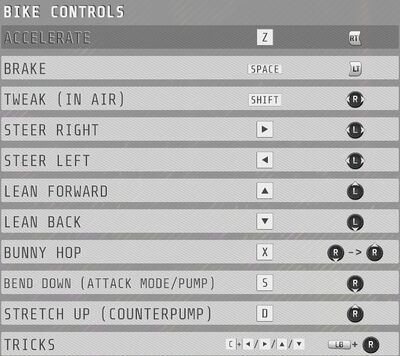 These are the bindings for the PS4 version: 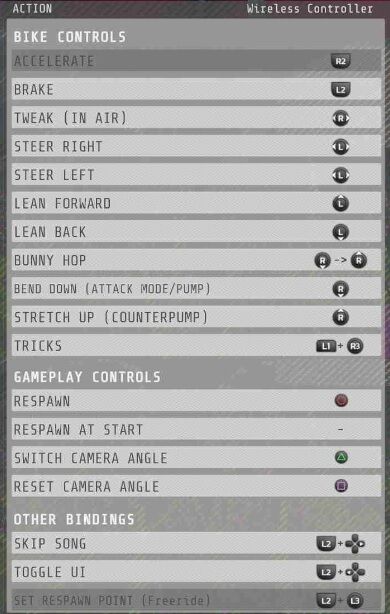 These are the bindings for the Switch version: 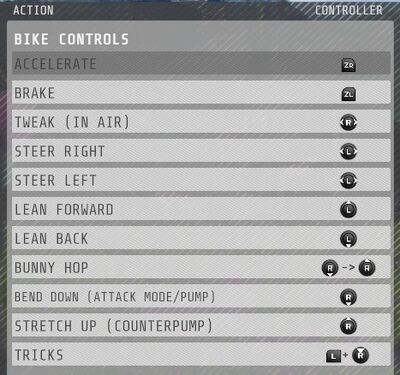 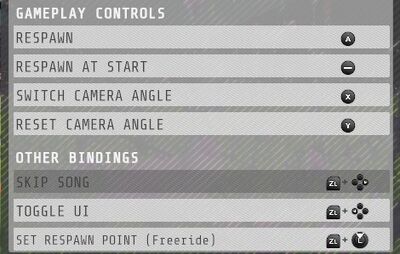 There are 5 types of tricks that can be done by pressing C (on keyboard), LB (on Xbox controller), or L1 (on PlayStation controller) - the directions listed indicate the direction in which to press the key/move the stick. For a full list, refer to the above page.

Not listed in the bindings in-game are the binds to use the handlebar item or say "Hey" (which can be toggled in the options menu). To do that, press "A" (keyboard)/press on the right stick (Xbox/PS4 controller/Switch).